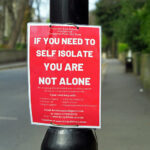 There is no doubt that 2020 is going to go down in history as an unforgettable year (if I have to hear the word ‘unprecedented’ one more time..!). Millions of deaths, global protests, political upheaval and the ongoing climate crisis have dominated the news and social media, and the addition of being in lockdown for most of last year has raised new questions and fears about mental health, equal access to resources, and the capabilities of those in charge. It doesn’t come as much surprise then that 65% of Britons believe it is unlikely the world will change for the better as a result of the pandemic – 2020 in many ways showcased how flawed and fragile we are as humans, and the people who were (somehow) voted into power reminded us how little they cared for people’s lives and needs.

Whilst 2020 may have reiterated the greed of many of the rich and powerful, the last few months have also reminded me about the power of the ‘regular’ citizen; the power in community. While some state leaders have shown their incompetence in leading through a crisis and others have displayed borderline tyranny in trying to win elections (no prizes for guessing who), communities have pulled together and mobilised to address social needs and shift power imbalances.

Essentially, they’ve managed to get sh*t done, while those in charge have denied, delayed and diverted. This is of course not a new phenomenon at all – community organising and grassroots activism has sat at the heart of crisis response and change for years and years. But reflecting on the many ways in which communities pulled together last year has really helped me to reframe how I view 2020, and has given me some hope for humanity going forward.

One of the most significant ways in which people mobilised to make a difference last year was through local community-building and organisation, particularly in response to COVID-19. COVID Mutual Aid groups have popped up everywhere – some as soon as a few days into the first lockdown last March – with the aim to provide support and aid to people in need on a very localised basis. Much of this has been focused on getting food and medicine to those shielding, but has also involved crowd-funding, sourcing items for families in need, and tackling social isolation. One of the most heartwarming things for me last year was logging into Facebook and seeing the comments in my local group – people of all faiths, ethnicities and ages chatting, sharing and supporting one another. And while the knowledge that thousands of people connected and volunteered together is powerful enough in itself, a report looking into the role of mutual aid groups last year underlined how they actually had a ‘bigger impact’ on local communities than other government volunteering initiatives, and have the potential to reshape the way we view community power in the longer-term. Whilst originally COVID Mutual Aid groups were created as networks for immediate crisis response, they have paved the way for the potential transformation of how community services are designed and delivered in the future.

Linked to this was the entrepreneurial spirit that was activated by the pandemic, with many individuals identifying niche gaps in needs and resources and taking the plunge to address these themselves. I work in community development, with lots of small and grassroots organisations, and over the past few months I have seen so many new initiatives emerge in response to COVID-19 related challenges – some quite by accident! A particular (and slightly biased) example is Spark & Co – a socent founded by Ishita Ranjan last April in order to address the unequal access to information and resources experienced by ethnic minorities and other marginalised groups during the pandemic. I sit on the Advisory Board (hence the bias) and I’m in awe of how much the small team has achieved in such a short space of time. Besides their accessible online database of resources, they have been working on a micro-scale with local organisations, to help their communities stay connected and safe – for example, they provided mobile phones and data packages to women and families who’ve experienced honour-based violence after lockdown made drop-in services inaccessible.

Tackling isolation and inaccessibility is such a vast and complex issue, and in many cases, the only way to help those in need is to provide them with the practical materials and resources to fill the communication gap – and this only works if you understand the specific needs of the community and the context within which they’re living. It takes time, money, energy and empathy, and the ability to tailor support to local groups, or even individuals, which not every organisation has the flexibility or resource to do. Therefore the emergence of many new community initiatives and enterprises focused on addressing local needs – and usually by people who, a year ago, wouldn’t have even dreamed of setting up a community enterprise! – has been incredible to see, and shows that in actual fact, we can all harness our creativity and motivation to make a difference. To all the creative social entrepreneurs and leaders out there, who’ve taken the plunge and put time and energy into community problem-solving: I salute you, you’re awesome!

An incredible feat during the US last year that really reinforced my belief in the power of people and community, was the success of Stacey Abrams and her teams in flipping the state of Georgia to vote Democrat – both in the state senate and presidential elections. Georgia hasn’t voted blue since 1992, and many thought it an impossible task given the voter disenfranchisement in the state. Enter Stacey Abrams. Once elected to the Georgia House of Representatives in 2007, she began working with grassroots initiatives across the state focused on reengaging citizens in the democratic process, and eventually founded two organisations of her own. Her approach was to ensure that ‘no door was left unknocked’ – focused on having feet on the ground and building trust with local people and communities.

There is a lot to be learnt from Abrams’ approach; she very much played the long-game, understanding that building trust is about creating spaces for people to connect and feel safe – and that it takes time. With the whirlwind of short-notice elections and referendum drama the UK has seen over the past few years, perhaps it’s been tricky for us to be thinking long-term, but there is no doubt now that Abrams has provided us with a new blueprint for election success (Labour, are you listening?). It’s also important to acknowledge Abrams’ influence as a Black woman, and that in Georgia there is a history of grassroots campaigning led by Black women and other women of colour. Women of colour are very much undermined in politics across the world, but to me Stacey Abrams and her success represents a new era; a new vision of what power could, and should look like. Abrams has since been nominated for a Nobel Peace Prize, and I will relentlessly be using her work to argue with anyone who says their vote doesn’t count – because she’s proven how much it does.

We cannot reflect on 2020 without acknowledging the resurgence of the Black Lives Matter movement – initially a local response to the murder of George Floyd by Minnesota police last May, which then grew into international acts of solidarity and calls for the eradication of systemic racism worldwide. The right to protest has always been protected by (so-called) democratic countries, as they are essentially built on the premise of ‘power to the people’ and in giving every citizen a voice. Millions of people across America came out in solidarity with BLM, in what may have been the largest movement in US history. And while we still have a long way to go to eradicate structural racism across the globe, there have been some positive effects so far – from changes in police funding and policy, to the reframing of history and culture. In the UK, protests were held across 260 different towns and cities last summer, and it has brought the issues of systemic racism in this country back to forefront – across politics, business, the arts and education. Many of these local protests were organised by students and young people, who succeeded in raising hundreds of thousands of pounds to support anti-racism campaign groups.

Our democratic right to protest has again been called into question in the last couple of weeks, as the Tory Policing Bill passed it’s second reading in the Commons – a Bill that gives police the powers to clamp down on protests, and provides greater scope for them to decide when and how protests are allowed. This is equally dangerous and terrifying – if police are allowed to shut down gatherings which they deem “a serious annoyance” (words taken from the Bill itself!), then the whole foundation of protest being to disrupt and get attention is demolished. Sisters Uncut, a feminist action group, have been leading consecutive days of action to #KillTheBill, and have so far succeeded in delaying the Bill in Parliament. While our right to protest still hangs in the balance, the work of Sisters Uncut reinforces what the young BLM activists proved to us last year – that years of experience and ‘authority’ aren’t necessary for leading change; just motivation, belief, energy and persistence.

Power is with the people

All of the examples above reiterate how powerful the ‘average’ citizen can be in making change. 2020 was a horrific year in many ways, which was exacerbated in many countries by the pitiful actions of inept governments, and it is so easy to focus on the negativity in the media.

But we are surrounded by good, by those who want to help and make a difference. And that’s what I want to focus on when looking back on last year – so many individuals chose to step up, take initiative and work together to make change, without relying on the state or those with power or authority.

If the last year has taught us anything, it’s that power truly is with the people – and I’m hopeful that as we move towards a ‘new normal’ (another phrase I never want to hear again), we can continue to remember and practise that.

Sheetal (she/her) is passionate about community building – she works in community development by day, and is also the co-founder of South Asian Sisters Speak (SASS), a community platform created as a safe space for South Asian women to connect and share mutual experiences. Her hobbies include reading, writing and ranting. She believes in social change, intersectional feminism, and the power of a good book.
Twitter: @sheetal_mist05 @weare_sass

2020 reminded me about the power of people