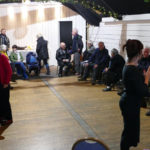 Today I stand here, in this place.

Aware of the imminence of western societal collapse. Alive to the likelihood of climate breakdown. Accepting (as far as I can feel) the possibility of human extinction.

Before this, I’d spent two years aimlessly swilling about after 15 years of focused career goal-getting. The swilling was intentional, to make space for the swirling eddies of my life to slowly coalesce into a new spiral of purpose. To just let things be a while before I got back on the mission horse.

In that time I walked the land a lot. I changed my lifestyle and tuned into my body. Twice I prostratedly pledged to serve Mother Earth as she needed.

The moment when those eddies began to coalesce was unexpected.

It’s serendipitous that I’m here. Just a Jungian gut decision. A semi-conscious choice to open the doors to synchronicity.

I shuffle in with Steph and Jamie. I’ve heard them talking earlier, about building local resilience. They say it’ll help create readiness for the impact of climate chaos and disrupted food supplies. I’m not sure what I make of that. To be honest it scares me. But I’m here anyway. I’m here because I like Steph’s work and I wanted to meet her. She said come meet Jamie too and find out about their Torridge movement.

As the evening unfolds I watch and listen, moving from group to group.

Listening to the 30 local folk who’ve come. Hearing stories of twisted council decision making. Of people not being listened to. Of local views and environmental concerns being ignored in the interests of housing developers and ‘economic progress’. Of lone voice councillors being ignored and ostracised.

I listen. And I watch each group listening to each member’s stories. My chest goes tight in the middle. Their stories are not unusual but each one’s tragedy becomes viscerally real in a way I’ve never felt before. Our broken political systems. Ignoring the people. Corrupted and inaccessible. Failing to be accountable. Trapped in the monomyth of ‘progress’ despite the cost.

To write a new story.

As the evening draws to an end a plan emerges for the next event. It will be Torridge District’s first people’s assembly, with three times as many people. Because each person here will bring two others.

The assembly will be the platform for the next event, and hopefully, further down the line, the District will get some gutsier, more compassionate councillors able to make a stand (It did! They went on to win 9 local council seats, including 2 district council seats 5 months later).

I leave during the wind-down. Overwhelmed and inspired. And hungry. So I eat chips and reflect on our broken political system. I am fascinated by this revelation of brokenness.

Stepping out of the apathy cupboard.

That was the moment the door to where I stand today cracked open. The moment I peeked out of the apathy cupboard and stopped accepting “that’s just the way it is”. The moment when I began to align with a new mission. Not a hero mission, but one of becoming a more compassionate and insightful human. Who acts not just for the hope of an outcome, but because compassion calls an action kind and opens a heart to the world’s pain, or because insight calls an action right and in service of goodness. These actions, I know, ripple wider across the web of life than can be measured or imagined.

Three months later I stepped completely out of the cupboard and dived into the facts of climate change, and accepting that no one is coming to sort out this mess.

Their courage gave me courage

When I look back I think it was the courage of those folk in Bideford to talk about their tragedies and hear each other’s stories that cracked my heart enough to release the false hope and denial that had hidden there. Their courage to tell their stories gave me courage too. Their belief in changing local politics revealed how broken our system really is.

Now I think that only in seeing clearly just how broken something is can one begin to believe that something different is possible. I believe that now, and I want to be part of making it happen, however many days we have left on this planet.

Joe Roberson is a new wave of activist working to find meaningful action in a world of deepening uncertainty. Also a ‘tech for good’ writer and charity blogger in the world of day jobs. He runs an award-winning bid writing and tech for good consultancy. Often found in his van.

The moment my climate apathy broke