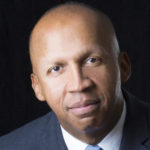 Bryan Stevenson grew up in a working-class family in Delaware. The great-grandson of slaves from Virginia, Stevenson’s grandfather was murdered for his black-and-white TV when he was a teenager.

Stevenson graduated from Harvard Law School and is the co-founder of the Equal Justice Initiative: a legal practice dedicated to defending those most in need.

Today, he has won relief for condemned prisoners; secured the release of many innocent survivors; fought to end the death penalty; fought to end life sentences without parole for children (and won) and is fighting for those incarcerated with mental illness – who are continuously failed by the justice system.

McMillian is in some ways a microcosm of that reality. He’s representative of what we’ve done to thousands of people.
Bryan Stevenson

Most of the book is about Stevenson’s most famous case representing Walter McMillian. McMillian was a young man on death row for killing 18 years old, Ronda Morrison, a white woman from Monroe­ville, Alabama, the home of Harper Lee, the author of “To Kill a Mocking Bird”.

McMillian had little dealings with the law but had been having an affair with a white woman. This made McMillian vulnerable to prosecution. Three witnesses testified against McMillian, while six black witnesses, including a police officer, testified he was at a church fish fry – 11 miles away from the scene of the crime when it occurred. McMillian was found guilty and held on death row for six years.

This is one of the few cases I’ve worked on where I got … death threats because we were fighting to free this man who was so clearly innocent. It reveals this disconnect that I’m so concerned about when I think about our criminal justice system.
Bryan Stevenson

Despite winning McMillan’s freedom, Stevenson reminds us of the trauma that the justice system brings to those condemned.

You can’t threaten to kill someone every day year after year and not harm them…break them in ways that are really profound. When innocent people are released, we just act like they should be grateful.
Bryan Stevenson

Children in the justice system

The incongruity of not allowing children to smoke, drink, vote… because of their well-recognised lack of maturing… while simultaneously treating some of the most at-risk, neglected, and impaired children exactly the same as full-grown adults in the criminal justice system.
Bryan Stevenson

Stevenson took on the representation of several clients sentenced to life in prison without parole for crimes committed as children. Stevenson exposes the injustice of children being prosecuted as adults and placed in adult prisons, often beaten and sexually abused.

Mercy is a radical kindness. It is not deserved or guaranteed. It often means forgiving unforgivable mistakes. It is the sister of cruelty. In a world aching in its cruelty – we need mercy now more than ever.

Buy on Amazon Buy on iBooks