A lot of people in the UK don’t know who runs their bus network.

This was an issue that came up regularly when Pascale Robinson, activist and central organiser of the Better Buses For Greater Manchester (BB4GM) campaign, began talking to local people about their buses in 2018. “People felt that buses were particularly unreliable in Greater Manchester, and they felt they were really expensive.” She says.

This overall feeling fed into the campaign; videos reiterated the fact that an hours travel in London is capped at £1.50 thanks to the ‘hopper’ fare but that there is no hourly fare in Greater Manchester, meaning an hours travel on any bus in the region can be anything from the £2.50 it would cost me for a single fare for the 15 minute bus journey into my local town centre to the £5 upwards it would cost for a day ticket (single operator tickets are cheaper, tickets you can use across more than one operator cost more and are not widely promoted). It’s an eye watering comparison, one that summed up the central argument of the BB4GM campaign: Why can’t Greater Manchester have what London has?

How did our bus networks end up this way?

UK buses (outside London) were de-regulated in 1986. The Secretary of State for Transport at the time, Nicholas Ridley, believed that the existing publicly run system had led to a twenty year decline in services and to the creation of monopolies that were restrictive. He believed that opening up the bus network to the private sector would increase competition and improve services. His speech to parliament on the occasion of the second reading of the Transport Bill in February 1985, in which he makes these points, can be found here. Since the passing of the Transport Bill in 1986, buses have been run by private sector bus companies, leading to new monopolies rather than competition and a race to the bottom in terms of quality.

The We Own It sponsored BB4GM campaign was inspired by legislative changes put forward by the Bus Services Act 2017. While it doesn’t make possible a full reversal of de-regulation (it doesn’t allow local authorities to create their own bus companies as they had been able to pre 1986) it does open the door for public control in the form of a franchising system, putting local authorities in control of routes, fares, payment systems and information.

BB4GM began with a public meeting in early 2019. Robinson estimates the attendance as “Over 150 people.” The meeting (filmed and later featured in a documentary), brought activists, academics and bus users together using “the barnstorm model”; a large scale in person or online event that creates sufficient energy and inspiration to get people to commit, at the event, “to a really clear but big action.” Specifically, to meet their council leaders on a bus, or at a bus stop for a conversation about buses.

Off the back of talking to bus users, BB4GM launched a petition demanding the Mayor of Greater Manchester, Andy Burnham, use the new powers presented in the act to take the local network back under public control. The petition attracted over 10,000 signatures and was presented to the Mayor’s office in early 2020 as the first public consultation on the issue was drawing to a close. By this time, Robinson had pulled together a coalition of “unions, environmental groups, cycling campaigns, tenants unions, anti-poverty groups, Quakers and community groups that had tried to save local routes.”

Robinson and the campaigners were creative in their thinking when it came to devising eye catching activities. As well as helping to ensure that the campaign remained inclusive, “It makes it really fun to do something really silly.” The fight for better buses went on for a long time “so we had to think of interesting ways to keep the momentum up.”

One of these actions was a long queue for better buses, complete with authentic looking bus stop, which was held outside Andy Burnham’s office. Similarly, a central motif of BB4GM’s videos, marches and demonstrations was a feline figure in business dress: The Fat Cat, a visual reminder of the bus barons and their shareholders, the identified villains of the campaign.

And then there was Bus Regulation: The Musical!, a theatre performance created by the artist and activist Ellie Harrison, which told the story of Greater Manchester’s bus network from the 1960s to 2019 through the lens of musical theatre, taking the campaign story to new audiences.

Harrison, founder of Bring Back British Rail and Get Glasgow Moving, says the idea for the musical came from a childhood obsession with Starlight Express as well as a desire to create something “very upbeat and family friendly” about BB4GM. She had been commissioned by Manchester Art Gallery to create a piece that would tie in with their summer 2019 season; loosely based around crowds and protest in a nod to the double centenary of the Peterloo Massacre. Her secondary concern was to “Communicate this really complex history of public transport policy that so many people don’t understand”. Performances of Bus Regulation: The Musical! were filmed and used as part of the Manchester campaign. 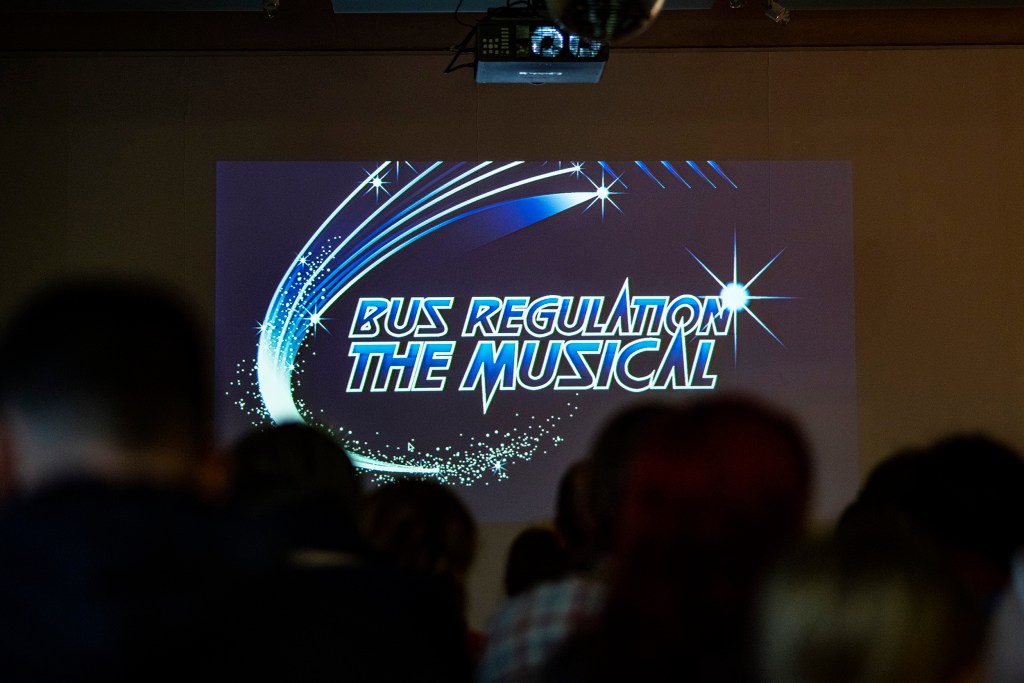 Robinson met Harrison in Glasgow during her first few weeks leading the Manchester campaign. “I went with them [Get Glasgow Moving] to visit [the Scottish] Parliament, and they had this brilliant group of passengers, they had a really good media coverage from that visit. And they won their campaign to make public ownership legal in the legislation” she says, referring to The Transport (Scotland) Act 2019. “We’ve learned loads from Get Glasgow Moving in terms of their consistency of messaging, their ability to keep a group going over lots of years, it’s brilliant campaigning.”

On the 25th March 2021, after two public consultations (the second was deemed necessary because of the devastating impact of COVID-19 on public transport and the economy), the Mayor of Greater Manchester, Andy Burnham, announced his intention to use the powers of the Bus Services Act 2017 to take control of Greater Manchester’s buses under a franchise system. While buses would still continue to be run by private companies, the GMCA (Greater Manchester Combined Authority) would have control of it’s fares, timetables and routes for the first time since 1986. Burnham also announced plans to introduce integrated ticketing across buses, trains and trams; something the ten Greater Manchester authorities have never been able to do previously.

When he made his announcement on the 25th March, he originally planned to introduce franchising in three phases across three years but, buoyed by a successful re-election campaign, the Mayor took to Twitter on the 10th May to announce that he was bringing his plans for the buses forward by a year. This is unlikely to have impressed bus operators Stagecoach, who – along with First – dominate the bus network in Greater Manchester, and who are currently pursuing a judicial review of the Mayor’s original decision in March.

Given that an earlier, pre-2017 legislation, attempt by campaigners in Tyne & Wear to re-regulate their bus network back in 2015 was scuppered by legal action from bus companies, it’s surprising that BB4GM aren’t more worried about the threat of a judicial review. While they are watching carefully, they are confident that the two public consultations were done properly and, as such, they have faith in the ability of GMCA to win through.

Visions for the future beyond Greater Manchester

What’s really interesting is the way that, even before Burnham’s announcement in March, other towns and cities were looking to the Manchester campaign and were being inspired to start their own local campaigns for better buses.

The pandemic has created several challenges, given that face to face campaigning is a strong trade union tactic. When lockdown hit in March 2020, they had “a fallow period” but continued to hold regular meetings while focusing on building a community.

In October 2020, they ran a “Reverse town hall” event on Zoom, taking in West Yorkshire, North Yorkshire and South Yorkshire. “We had bus users basically at the top of the meeting, talking about why the service was so bad, why it was failing them and why they needed a change” says Forest.

700 people sent emails to their council leaders ahead of the meeting, meaning “We got a very quick response from the council leaders”. The leaders were also discombobulated by the format of the reverse town hall: “Not speaking first, hearing from the constituents: We set the agenda – This is what we want to talk about, and we want very specifically to hear from you about if you will do this thing we’re asking you to do.” Forest says.

The leaders committed to public control of buses at the meeting, which Forest said “Energised and mobilised and brought people into the campaign. It was much more effective than just me having a bunch of private meetings with council leaders.”

The Yorkshire campaign was given support early on from BB4GM’s Pascale Robinson, who was able to advise those across the Pennines as to what had and hadn’t worked when campaigning in Greater Manchester. With the Yorkshire campaign taking off in 2020, Matthew Topham was hired by We Own It in February 2021 because it was felt that there needed to be a designated person within the organisation to work solely on the Yorkshire campaign with Gareth Forest and the TUC. Topham has been inspired by the success of BB4GM “To see it happen, to be able to say to our political leaders ‘Look! Others have gone before us, let’s just get on and follow them’” is, he feels, “So powerful, so inspirational, and it’s so pleasing to see that result coming out.”

Tracy Brabin, the newly elected Mayor of West Yorkshire, has strongly suggested that she is in favour of public control, so the signs for the Yorkshire campaign are good.

What we can learn from these campaigns

What all of these campaigns have in common is a focus on a very specific geographical area, strong coalitions of campaigners from different backgrounds, often with different interests and skills sets, and an immense sense of creativity and ingenuity when it comes to devising campaigns that can attract and maintain the attention of both the public and the media over a long period of time. They have been inclusive, rather than exclusive, campaigns not only in terms of the campaign language used (the Bus Services Act 2017 isn’t an easy read after all) which have attracted both the the young and the old, the urban and the rural, seasoned campaigners and newbies and have received support from groups as varied as the Women’s Institute and Friends of the Earth, the latter of whom brought the Fridays For Future climate kids to the BB4GM petition hand in in January 2020. Not only does this reveal how central the issue of good, accessible public transport is to many very different lives, but also that, in an age of division, it is possible to bring different groups of people together to build coalitions to fight for a cause that is widely shared and affects many people.

Cazz Blase (She/Her) is a writer/blogger from Stockport. She mainly writes about public transport and women and music. You can follow her on Twitter.

The UK bus revolution begins, not ends, in Manchester